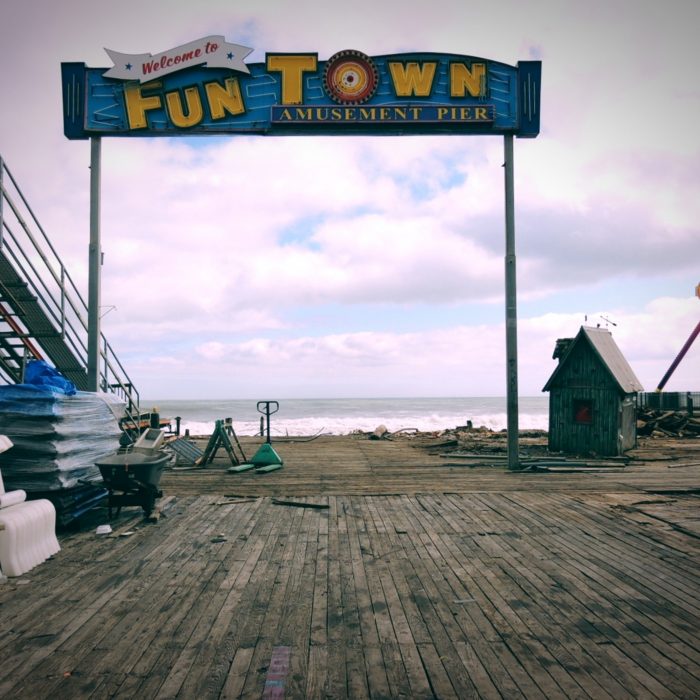 I almost hesitate to reveal this, but my wife and I are both natives of New Jersey. You know, the type of people on the highway who drive all the way to the very end of a merge lane before executing a (perfect, mind you) zipper-merge? Yeah, that’s us. Please do not judge us too harshly. Generally speaking, being a Jersey native is a badge we tend to wear with pride – well, much of the time. In fact, a few weeks ago, my wife and I were able to leave our two boys with their grandparents for a few days and escape to a New Jersey shore town so we could relive our days of yore filled with beaches, boardwalks, Bruce, Bon Jovi and bad food. Yet, our time at this particular shore town (which shall remain nameless to protect the innocent) stood in stark contrast to what I remembered from many, many years ago.

In short, the town was really - nice. Luxury beachfront properties overlooked the Atlantic. Once dilapidated structures had been revitalized to new glory, not unlike Union Station in downtown Denver. Gone were the fried clam strips and funnel cakes, as new restaurants highlighted the area's access to a beautiful and abundant array of seafood. Beautifully renovated homes were now selling for multiples upon multiples of their value from as recent as 8 - 10 years ago. My wife lamented as we strolled along the beach, “Don’t you wish we bought one of these places a decade ago?”

Therein lies the internal conflict of many investors. When times are good, it can be so easy to forget the struggles. As I walked around that sparkling “new” shore town, I was wonderfully surprised by what I saw, but it was still easy for me to remember that the beaches were not always so clean, or that it once was not a place where you should wander alone too far at night. Whomever helped to revive that once struggling town took a risk – a big one.

As a long-term investor and resident buzzkill, I cannot help but envision risk when presented with an opportunity. I attribute this mindset equally to being a New Jersey native, a Philadelphia Eagles fan and a long-term stock market investor. That is a helluva pessimistic trifecta. So, after my wife’s offhand comment, I proceeded to ramble on and on about hurricanes, insurance costs and how “truly irritating sand can be” when all she meant was that it would be nice to walk to the beach every day.

Similar to the shore town we visited, recent times for stock market investors have been, well, nice. As we close out the month of August, the steepest year-to-date decline in the S&P 500 has been roughly -4% versus a 41 year average intra-year decline of -14.3%. Volatility has been muted, which can lull investors into a false sense of complacency. So, in this letter, we will cover a few key themes that are top of mind for our team as we approach the end of 2021, with a focus on jobs and the labor market, inflation and the Federal Reserve.

Jobs and the Labor Market

To me, the most fascinating aspect of the United States economy right now is the labor market. The July jobs report released in August by the Bureau of Labor Statistics showed that the economy added over 943,000 non-farm payroll jobs as the unemployment rate fell from 5.9% to 5.4%.

Then, on August 9th, the Job Openings and Labor Turnover Survey (JOLTS) was released, providing additional insight into the United States labor market. In June of 2021, the number of job openings in the United States increased to over 10.1 million. Specifically, job openings increased in several industries, with the largest increases happening in professional and business services (+227,000), retail trade (+133,000) and accommodation and food services (+121,000). Based on this JOLTS data, job openings exceed the number of people unemployed by 1.37 million, as illustrated in the chart below.

In short, this chart indicates that there would appear to be 1.37 million more jobs available than there are unemployed Americans available to fill them.

Yet, somehow, businesses are dealing with significant worker shortages. The National Federation of Independent Business (NFIB) Research Foundation released a monthly jobs report that indicated that 49% of small business owners reported jobs that they could not fill in July. This is a 50 year high, and well above the historical average of 22%.

There may be a confluence of issues that are exacerbating this labor shortage, including:

There also seems to be a general sense of reflection happening among both job seekers and the employed. It may be easy to underestimate the effect that the pandemic has had on American psyches over the past 17 months as many, regardless of employment status, are now asking key questions like, “Is this where I want to live, who I want to be, where I want to work and what I want to do for a living?” These are not easy questions to answer and may help to partially explain why droves of job seekers are not rushing to fill open positions, despite desperate financial conditions, in many cases.

Important for investors: These jobs and labor market reports may also impact the mindset and the trajectory of the Federal Reserve, which we will cover later.

On August 11th, the Bureau of Labor Statistics released their July Consumer Price Index (CPI) report, and headline CPI came in at 5.4% while core CPI (excludes food and energy) came in at 4.2%.

Then, on August 27th, the Bureau of Economic Analysis announced that headline Personal Consumption Expenditures (PCE) came in at 4.2%, with core PCE (also excludes food and energy) at 3.6% y/y in July. Remember, PCE is the source that the Fed prefers when measuring inflation, and PCE at 4.2% and 3.6% is considerably lower than the 5.4% and 4.3% CPI measurements.

Generally speaking, CPI and PCE numbers fell in line with estimates, meaning that inflation is higher than the Fed's 2% target, but also that it is not necessarily running rampant, as was initially feared in the spring. This has then shifted focus to the Federal Reserve as investors try to gauge which of the Fed’s primary mandates (stable prices or full employment) will take precedence in the coming months. In recent days and after months and months of parsed language, we finally started to get a sense of what future Fed action might look like.

In recent letters, I have focused quite a bit on the Fed’s potential response to recent inflation and labor market data. In short, based on this data, I expected that the Federal Open Market Committee (FOMC) might start a dialogue about tapering asset purchases, and that is exactly what happened in July’s FOMC meeting.

On August 18th, the Federal Reserve released the meeting minutes from their July session. In the meeting - and in a significant change of course - the FOMC members discussed the timing of tapering activities. The term “tapering” refers to a gradual slowdown in the Federal Reserve’s large scale asset purchases. Generally speaking, the Fed executes these asset purchases to induce liquidity and keep long term interest rates lower.

Among investors, talk of tapering is generally viewed as the beginning of the end of the Fed’s hyper-accommodative policy and a gradual shift back to normalcy. That does not mean that all FOMC members are in agreement with when the tapering should begin. Some members believe that the Fed has met both their price stability and employment goals and view Q4 2021 as an appropriate time to start tapering. There is definite disagreement on this. Other members believe that the trajectory of the economy hinges too much on the Delta variant at this time and that there is too much uncertainty with regard to the COVID-19 pandemic.

The bottom line is that the Fed is talking about tapering and is discussing timing, which it has specifically avoided in previous meetings. Markets reacted to this development with some hesitancy in mid August as the S&P 500 pulled back slightly.

We then got further clarity from Fed Chairman, Jerome Powell as he spoke from the virtual Jackson Hole symposium. When the Fed began their accommodative policies in 2020, they did so with loosely defined objectives of substantial further progress towards their inflation and employment goals. During the symposium, Powell stated that he believed that the Fed has met their requirement of substantial further progress when it comes to inflation. Remember, the Fed wanted inflation to climb toward its 2% target at the time. Meanwhile, there has been clear progress towards their employment goal, but Powell stressed that more work needs to be done and that the Delta variant of COVID-19 remains a risk to the United States pandemic recovery effort.

Financial markets reacted favorably to his comments regarding the fed funds target rate, when Powell said, “The timing and pace of the coming reduction in asset purchases will not be intended to carry a direct signal regarding the timing of interest rate liftoff, for which we have articulated a different and substantially more stringent test. We have said that we will continue to hold the target range for the federal funds rate at its current level until the economy reaches conditions consistent with maximum employment, and inflation has reached 2% and is on track to moderately exceed 2% for some time.”

Since those comments were made, markets continued their ascent before pausing for a slight breath, as of this writing.

Meanwhile, Q2 earnings as of this writing were very strong, with roughly 87% of S&P 500 companies beating earnings estimates, which represented the highest percentage of earnings beats since this data started being tracked by FactSet in 2008. Equally impressive is the magnitude of these earnings beats, with companies on average reporting earnings that are 17% above estimates versus a five year average of 7.8%.

There is a similar story when it comes to revenues, with 87% of S&P 500 companies beating revenue projections by 4.9%, on average, which is well above recent historical averages, as seen in the chart below.

I know it is cliche at this stage for a professional investor to use a Warren Buffet saying. Doing so is akin to a New Jersian quoting a Bruce Springsteen song. Still, the one Buffet line that seems to have resonated the most with me throughout my career has been, “Be greedy when others are fearful. Be fearful when others are greedy.” That does not mean we cannot enjoy the market activity we have experienced since mid-March of 2020. We have all earned a long respite from severe market volatility, for sure. Still, this is not the time for investors to “get out over their skis” or “take their chips entirely off of the table”. It is, however, the perfect time to ensure that they are invested in a way that can help them achieve their financial goals in both good times and bad, which is what we do on our clients’ behalf every single day.

Markets and Economy Update - May 2022