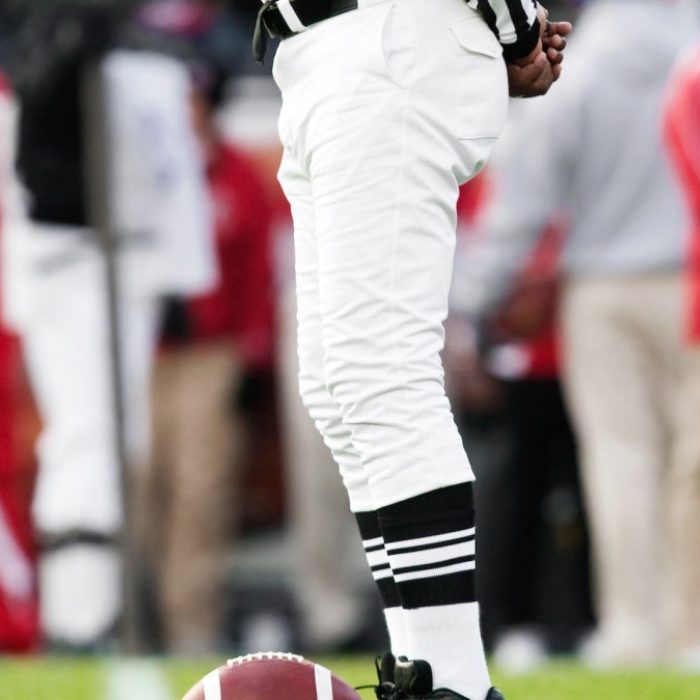 In late May, over 5.8 million viewers tuned-in to watch Tiger Woods, Peyton Manning, Phil Mickelson, and Tom Brady play a sloppy round of golf in the midst of a torrential downpour. Highlights of the match – to many viewers, anyway – included Tom Brady splitting his pants, commentator Charles Barkley’s incisive trolling, and Phil Mickelson’s chiseled calves. Given the record viewership for this event, I think it’s safe to say that Americans are a bit starved for competitive, live sports. As such, I thought I’d begin this month’s market & economy recap by using a sports metaphor to dissect and explain what we’ve experienced in financial markets in recent weeks.

As a lifelong Philadelphia Eagles fan (don’t hold it against me), I’ve watched a handful of games in past years with halftime stat-lines that look something like this: 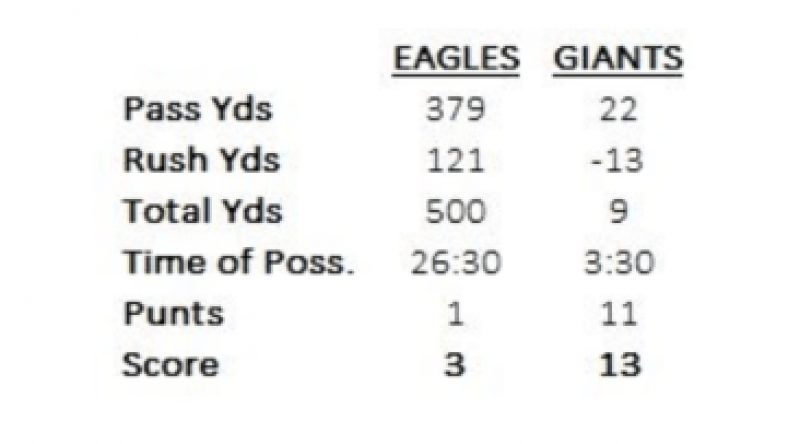 As each team jogged to their respective locker rooms, I’d look at the stats, scratch my head and think – “Eli Manning has played like he’s had his pants around his ankles for 30 minutes, yet somehow the Giants are up by 10 points at the half?” Based on statistics alone, you’d expect the Giants to be down by several touchdowns, at least.

Similarly, both financial professionals and retail investors alike see the data detailed below and may be a bit befuddled by the general rally that the S&P 500 has experienced since late March. In fact, I’m sure many of you continue to see bear market prognosticators all over the financial news networks screaming “This can’t be happening! This rally defies all logic!”

You have to consider that, in sports, there’s an additional actor that has the ability to influence outcomes – the referee. In fact, if it weren’t for referee influence, I am absolutely convinced that my Eagles would’ve won at least a dozen Super Bowl titles over the last 2 decades, and Denver Bronco OT Garrett Bolles would be considered a Hall of Fame candidate at this stage of his career. I’m being facetious, of course, but financial markets do have an additional actor – a referee, if you will – that can impact & influence outcomes, and that referee is the Federal Reserve.

I was on a conference call a few weeks ago led by JP Morgan’s Chief Global Strategist, and I heard a statistic that really jumped out at me. That statistic – paraphrased – was that in the first eleven weeks of the COVID-19 crisis, the Federal Reserve pumped more liquidity into financial markets than they did over the course of 5 years during the Global Financial Crisis beginning in 2008. I believe I’ve used the word ‘unprecedented’ in nearly every communication since early March, but there truly is no other word that can appropriately describe the actions that the Federal Reserve has taken in recent weeks and months. We’ll start by summarizing these actions below, then we’ll dive into a few key points:

In aggregate, these very aggressive actions have clearly helped to stabilize both equity and bond markets in the short term, but there’s one initiative that seems to jump out at me as particularly unprecedented (there’s that word again).

The Secondary Market Corporate Credit Facility (SMCCF) is a special purpose vehicle (SPV) established for investing in eligible individual corporate bonds, eligible bond ETFs, and eligible broad market index bonds. Eligibility is based on certain factors such as domestic corporate presence & labor force, credit quality, and so forth. The Fed limits itself to purchasing no more than 10% of a company’s total bond issuance, or 20% of an ETF’s outstanding shares. Those aren’t insignificant percentages, by the way. Historically, the Fed has been limited to conducting open market operations and primarily buying and selling U.S. Treasuries only, thus impacting the money supply and interest rates. In my experience, this SPV arrangement is absolutely unheard of, and may help to explain – at least partially – why we are seeing an increased risk appetite in financial markets.

Think of it this way – let’s say that you just landed a great new job that pays well. You want to reward yourself by purchasing a new Tesla Model X for roughly $90k, and you want to finance the entire purchase. However, your new company is a startup and you’re worried about job stability over the next few years and this car purchase represents a personal financial risk. If your new company fails and you lose your job, those car payments will become more and more difficult to make each month.

Let’s also say that you have a rich Uncle Mortimer who lights Cuban cigars by burning $100 bills, and he says to you “listen – if you buy that Tesla for $90k and you lose your job, you can sell it to me and I’ll give you enough cash – at least – to pay off the remainder of your car loan.”

In that scenario, you’d be much more inclined to take the risk and buy the Tesla than you would if you didn’t have rich Uncle Mortimer backing you up, right? It’s easy to acquire something if you know there’s a willing buyer who will pay a fair market value for your asset should you need to unload it at some point in the future.

Clearly, it takes all of the Fed initiatives outlined above, in aggregate, to generate the level of investor confidence that it takes to move the S&P 500 from 2,100 to 3,100 in just a few weeks. However, the Secondary Market SPV example exemplifies the general sentiment that leads an investor to think “hey, if we get in trouble again, the Fed (rich Uncle Mortimer) will come to the rescue and take any-and-all steps to not only support the economy, but also individual corporations and – subsequently – investors. So, why not take the risk?”

While it’s important to remain invested throughout any market cycle, at Destiny Capital, we do not believe that this is a time to be significantly accelerating your risk appetite. After all, elevated risks levels remain, which leads us to our final topic of this communication – the coronavirus pandemic.

COVID-19 Update – while singular national focus has somewhat shifted away from the pandemic, at Destiny Capital, we continue to monitor all readily available COVID-19 data on a daily basis. We are seeing a mixed bag, of sorts, in the United States with certain regions showing significant signs of recovery, and other regions experiencing alarming increases in daily confirmed new cases. In the northeast, particularly in states like New York and New Jersey, we’ve seen a significant and encouraging decline in daily confirmed new cases. Conversely, we are seeing a different trend in daily confirmed new cases in states like Texas, Florida, Arizona and others throughout the south and southwest. See the graphs below for a brief comparison of New York vs. Texas: 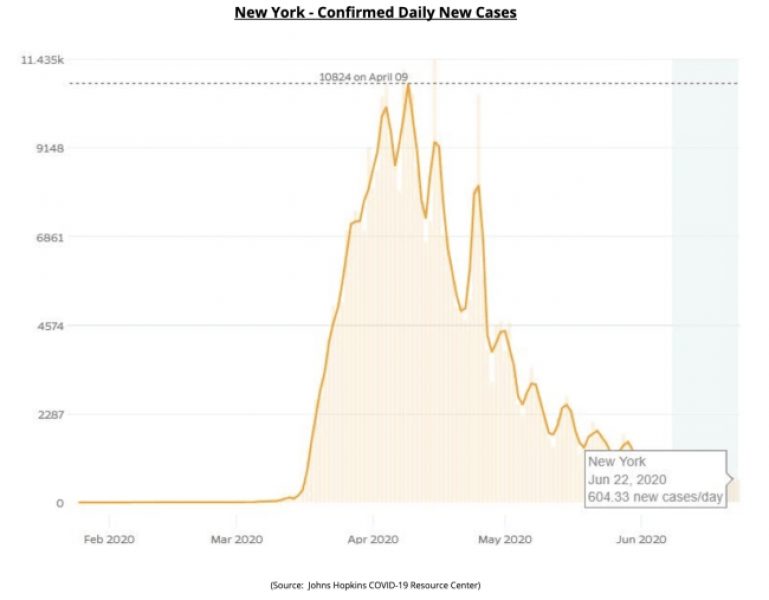 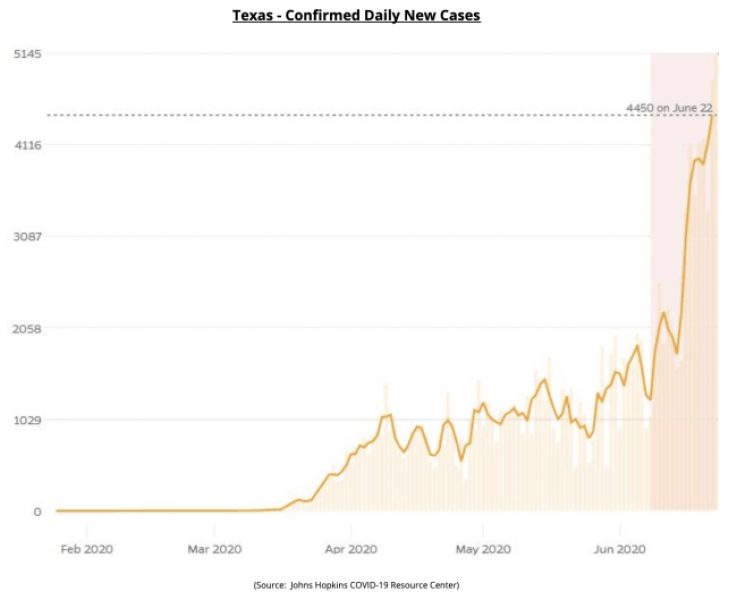 In fact, as of this writing, New York, New Jersey and Connecticut have announced that they will quarantine inbound travelers from new COVID-19 ‘hot spots’ for 14 days. Insert your ‘do I need incentive NOT to visit New Jersey?’ joke here. I’m a Garden State native – I can take it. All kidding aside, these are very new and significant developments that we are watching closely because financial markets can react quickly to both positive and negative news that may impact the severity and length of the pandemic. Daily new case data alone doesn’t tell the entire story, however, so we are closely monitoring other key data such as ‘percent positive’, which has experienced a minor uptick nationally, but more pronounced increases in states like Florida and Arizona. 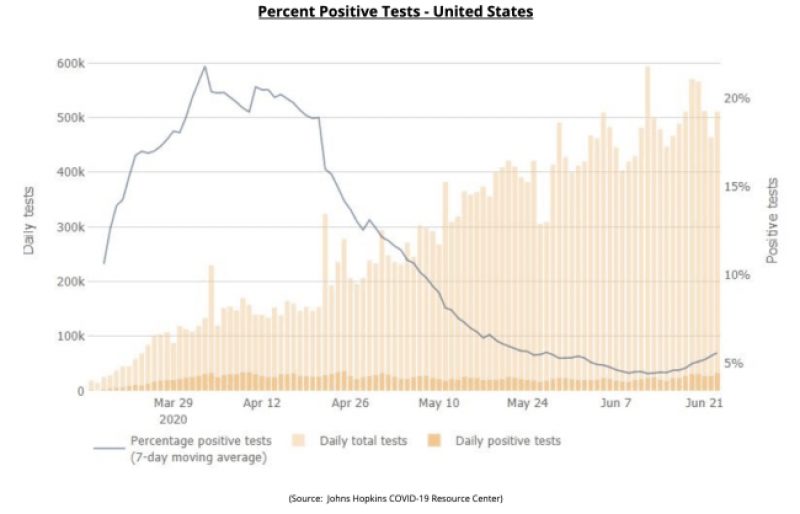 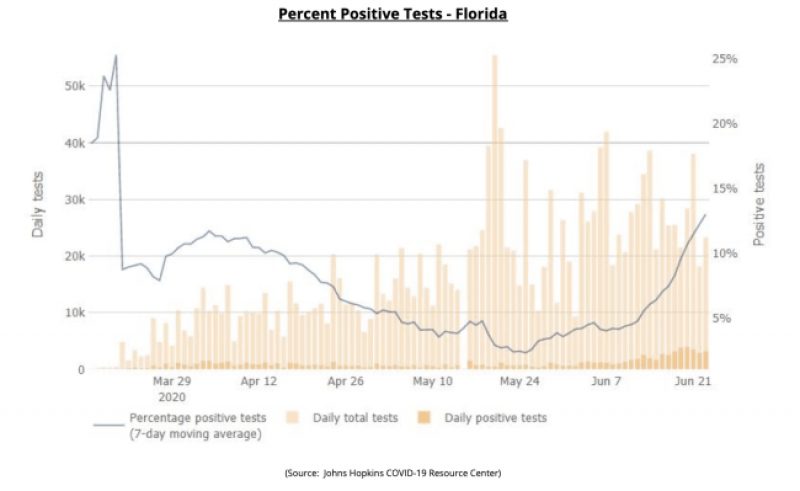 Regardless, at Destiny Capital, we’ve been anticipating significant market volatility and our portfolios are well-positioned to advance in rising markets and protect during market declines. Clearly, the spread of the pandemic across the south and southwest is alarming. However, it is also encouraging to see that states like New York, New Jersey, and Connecticut have been able to navigate through some extremely challenging circumstances and now find themselves in a position to ease restrictions and open their economies further.

As always, we will continue to provide updates as new developments and relevant data emerge, and your team is here to serve you and answer any questions you may have. For now, and until our next update, please stay safe, be well, and know that we are here to help in any way we can.