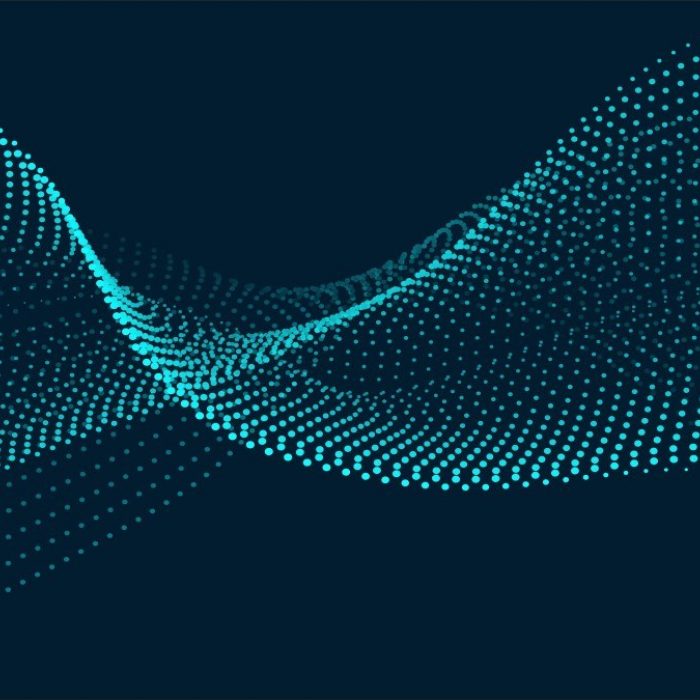 Attempting to comprehend some of the stock market behavior we’ve witnessed in recent weeks and months is a lot like trying to understand the behavior of subatomic particles in quantum mechanics.

Wait – what? Please, bear with me. As a self-confessed science fiction wonk, science, physics and the mysteries of the quantum world have always fascinated me – admittedly at a rudimentary level.

It was many years ago when, as a student, I was introduced to the famous and fascinating ‘double slit experiment’ that was first conducted by Thomas Young in 1801 to prove that light travels in wave-like patterns. In more contemporary iterations of this experiment, scientists randomly launched individual photons through a double slit screen and observed – to their utter astonishment – that individual photons exhibited wave-like properties, resulting in what’s called an ‘interference pattern’ as seen in Exhibit A below. Big deal, right? 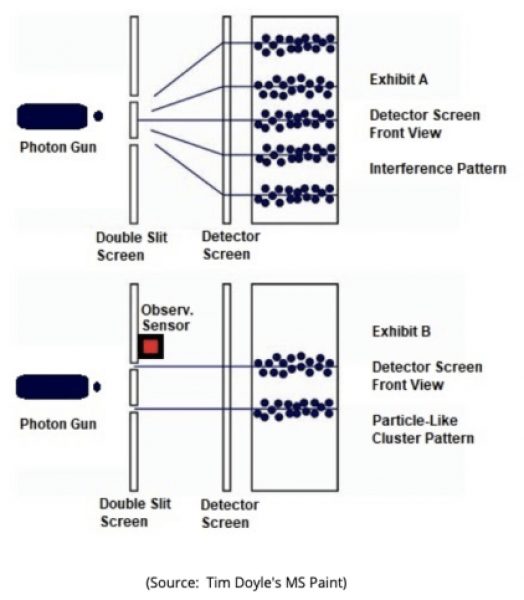 Well, this is where the experiment really gets interesting. Due to the unexpected interference pattern result, scientists decided that they should track which of the two slits that each individual photon traveled through, and they did this by directly observing one of the slits using sensor equipment.

Then, something peculiar and unexpected happened.

Under direct observation, the individual photons changed their behavior and – instead of traveling with wave-like properties and creating an interference pattern – they traveled like individual particles, resulting in a cluster-like pattern. This effect is known as ‘collapsing the wave function’, and is illustrated in Exhibit B above.

Scientists then got cute, and tried to ‘trick’ the photons by leaving the observation sensor in place, but unplugging it to see what would happen. Lo and behold, with the sensor unplugged, the photons went back to creating the wave-like interference pattern of Exhibit A.

No, the sensor itself wasn’t affecting the particles in some way. The photons changed their behavior simply based on whether or not they were being observed.

This experiment has led some to theorize that mere observation – or even consciousness itself – can impact the behavior of subatomic particles in the quantum world. Where’s a ‘mind blown’ emoji when you need one?

When it comes to financial markets, acute Investor consciousness has shifted to certain company stocks and this, too, has resulted in unexpected – and even mind-blowing – changes in conventional behavior. However, in these specific areas of the stock market, we aren’t witnessing the collapse of a wave, but the creation of one.

Think of a football game where a few boozy, rowdy fans hop out of their seats in unison, throw their hands in the air, then prod the sections around them to do the same. Before you know it, an entire stadium of fans are mimicking their behavior, leaping out of their seats and tossing their hands over their heads – even though most fans just want to return to watching the game, sipping their beer, and complaining about the refs.

Where is this accelerating stock market wave coming from? Well, since the pandemic began, we’ve seen a material spike in retail trading activity through discount brokerage services like Robinhood, and others, as illustrated in Chart A below. 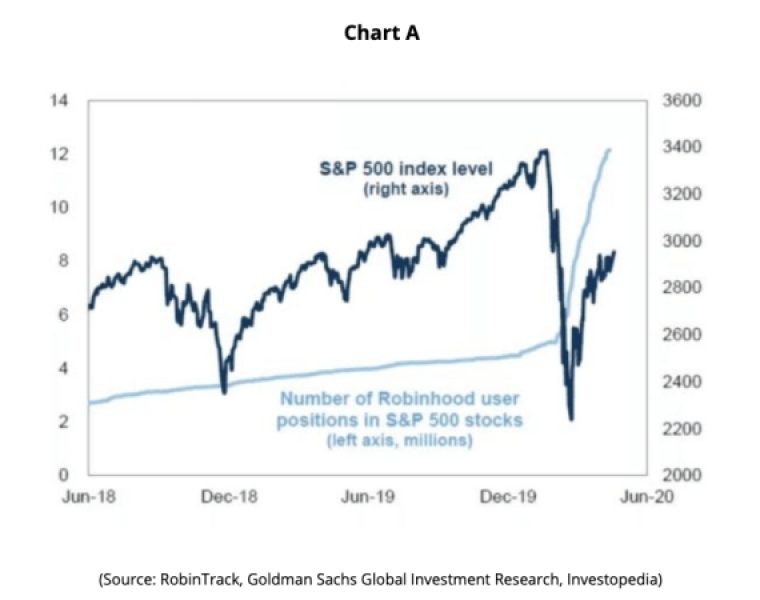 To their credit, many of these new traders guessed that a steep and dramatic selloff might present a buying opportunity using either cash or leverage – or both. After all, a 25-year-old has decades to absorb short term market volatility, and he/she isn’t risking a lifetime of accumulated assets. However, to be very clear, these traders are not investors – these traders tend to be inexperienced speculators who unwittingly rely on the ‘Greater Fool Theory’ to drive-up stock prices. Speculators do not invest – they covet – and to quote (of all people) Hannibal Lecter, “we covet what we see every day.”

Many new traders often invest in what they know, and this may help to explain why we are seeing astronomical returns in familiar and popular names like Tesla (+406% YTD), Zoom (+339% YTD), and DraftKings (+264% YTD). After all, these traders may be thinking – “I want to buy a Tesla Model 3, I sit in Zoom meetings for 60% of my day, and my Draftkings NBA fantasy playoff team just won me $50 – so, these companies have to be good investments, right?”

To give you some perspective in addressing that question – we use Price-to-Earnings (P/E) ratios to gauge a stock’s price relative to its company’s earnings. A lower P/E ratio relative to industry or peer averages may indicate that the stock could be undervalued. Higher P/E’s may indicate that a stock could be ‘getting a bit frothy’, as we like to say in this industry.

As of this writing, Tesla had a P/E of 1,042. Zoom had a P/E of 1,746. The P/E of Draftkings cannot be adequately measured because the company has negative earnings. Historically speaking – and under normal circumstances – the S&P 500 index has a P/E ratio that tends to hover in the 15 to 25 range.

Given this type of data – and to state it plainly – speculators are buying these stocks without lifting the hood or even kicking the tires.

What we are witnessing today is a level of FOMO (Fear of Missing Out) that distinctly reminds me of the Bitcoin bubble of 2017. For those of you who don’t recall this event – we saw the price of the cryptocurrency Bitcoin rise from roughly $1,000/coin in early 2017 all the way up to $19,665/coin by December of 2017. Everyone wanted a piece of the action – until the buying momentum finally stalled. Eager buyers turned into panicked sellers, not wanting to ride the rollercoaster all the way to the bottom when the price of Bitcoin quickly plummeted to $6,300/coin in early 2018, then all the way to $3,400/coin by December of 2018. Yes – that might’ve been a solid trade for those who bought Bitcoin in early 2017. However, the trade turned out to be catastrophic for the vast majority of those who were even just a little bit late to the Bitcoin party.

To solidify this point, I took my research to the one place where I knew I could find all of the answers to my many questions – TikTok. TikTok is a social media platform that is used to share short, edited videos that are roughly 30 seconds in length. According to the digital marketing agency, Omnicore, 44% of TikTok users are between the ages of 16-24 so – as you might imagine – the users of the app tends to skew young among Gen Z and Millennials.

As an investor, what I saw on TikTok really caught my attention and raised some red flags. In a sample of the posts that I viewed (there’s 15-20 minutes of my life I’ll never get back), I saw multiple videos that specifically referenced Tesla stock, and how that particular video creator/influencer was/is using Tesla stock option trading strategies to get rich quick. After all, picking hot stocks, trading options, and making a boatload of money is easy – until it isn’t. For an inexperienced and naive trader, the outcome of speculative trading can sometimes be financially, and prodigiously, catastrophic.

Despite the general – and unintentional – ‘get off my lawn’ tone of this communication, I am not insinuating that Tesla, Zoom, or Draftkings are poor companies or bad long-term investments at a different price point. Zoom has been absolutely instrumental in allowing companies, schools, and families to remain connected throughout this pandemic, and their societal importance can’t be overstated. However, these companies, and others like them, have become the focus of a singular consciousness among some aggressive speculators and FOMO traders which – much like the behavior of the subatomic particles discussed at the beginning of this letter – can cause shocking and unanticipated behavior.

As someone whose job is to identify and mitigate risks inherent in financial markets, volatile behavior – on both the upside and downside – is a cause for scrutiny and inspection. That is what this communication is intended to provide.

What does this mean for disciplined, long-term investors? Well, despite grim unemployment data, there have been some positive developments when considering data from both the economy and financial markets. The Q2 earnings season saw a near-record percentage of companies exceeding earnings estimates, led by Information Technology, Materials, Industrials and Health Care. Last week, the Flash Manufacturing Purchasing Manager Index (PMI) came in at 53.6, while the Flash Services PMI came in at 54.8. The Purchasing Managers Index is a leading indicator that represents survey responses from senior executives of roughly 400 companies representing 19 industries. Any number at 50 or above would indicate a positive, optimistic sentiment in manufacturing and/or services. Back in April, if you told me that we’d be seeing healthy PMI’s near the mid-50’s by August, I would’ve said you were crazy.

As I seem to say in nearly every communication, it is never a good idea to bet against the resiliency and ingenuity of the American economy. To bolster this point – this time last year – Destiny Capital’s leadership team was conducting our ongoing due diligence of our 3rd party vendor relationships. During an open discussion about video conference providers, one of our team members suggested “we really should consider Zoom”, to which I promptly responded “Who?”

Financial markets, the economy, our organizations, our lives and our world seem to be changing and evolving in perpetual motion, gaining momentum & rapidity, thus breaking the laws of thermodynamics (there’s that science wonk again). As always, we will continue to do our best to keep you informed, updated and educated which – we hope – will allow you to remain confident, appropriately invested, and focused on the things that are most important to you in your lives. If you have any questions, please do not hesitate to contact your Destiny Capital Team, and please stay safe and stay well.